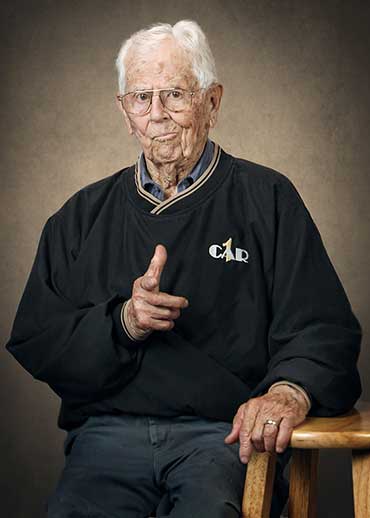 Grandpa had a great sense of humor, and he was a bit of a prankster. Often times at work we would send him to the post office or bank or to auto parts store more than once a day. If he did show up somewhere a second time, he loved to tell people that it wasn’t him that had been there before, but rather that it was his “twin brother.” Anything mischievous was blamed on his mythical “twin.”

He also loved to tell people that he had five dogs and a skunk at home waiting for him, but it took him a long time to get around to mentioning the fact that they were all just stuffed animals.

He kept his desk drawer at work stocked with Snickers and Baby Ruth snack-sized candy bars, purportedly for when the great-grand children came to visit. In truth it was more for his son and grandsons who worked with him. He would dutifully replenish them every morning after discovering that one of us had pilfered some for a late afternoon snack after he had gone home.

Another desk drawer contained a toy revolver, and he loved to remind us that he could use it to take care of any problems for us if we needed him to.

Grandpa was an early riser. He usually was up at 4:30 am and at work by 5:00 am – literally right up until the Lord took him home. When people would ask him why he got up so early, Grandpa would say “lots of people die in bed, so I try to spend as little time there as possible!” He had variations of the same joke involving death and hospitals, or sick people and doctor’s offices.

He wore a Detroit Tigers hat almost constantly. Pretty much the only time he took it off was for church. His long love for the ball club has made the whole family Tigers fans.

Grandpa wasn’t a consumer of alcoholic beverages, other than a rare snort of whiskey if he had a bad fever, but when he got ready to leave for the day he loved joking about going home to drink some of his “kick-a-poo joy juice,” or to drink the one (perhaps nonexistent) beer that he kept in his fridge.

Sometimes his jokes on the subject would prompt him to sing “Show Me the Way to Go Home” – a song that “Jaws” fans will recognize, but Grandpa knew the 1925 classic from when it was new.

Great Granddad, when the land was young,
Barred the door with a wagon tongue,
For the times was rough and the redskins mocked,
And he said his prayers with his shotgun cocked.

Twenty-one children came to bless
The old man’s home in the wilderness,
They slept on the floor with the dogs and the cats,
And they hunted in the woods in their coonskin caps.

Great Granddad was a busy man,
Cooked his grub in a frying pan,
He picked his teeth with his hunting knife,
And he wore the same suit all his life.

Grandpa also had favorite stories he liked to tell. One went like this:

The there used to be a hatchery across the street from the old shop (on Mechanic St. in Archbold), and people would go there to buy eggs. We had a big metal shears we used to cut apart cars, and sometimes after they got their eggs people would stop over and watch us using the shears. One time a man came into the shop with a bag of eggs in each hand to watch us cut though a frame. When we made the cut, a piece of metal snapped off and went flying right through the bag of eggs. You should have seen the look on the man’s face!

Grandpa also used a favorite story to remind us never to judge people by how they look. He said that a man once came into the showroom wearing dirty overalls and no shirt. The man said he wanted to buy the vehicle that was sitting on the showroom floor. While some salespeople might have been tempted to assume that the man would not be able to purchase a vehicle, Grandpa went ahead and talked to him. In the end, the man pulled out a huge wad of cash from the front pocket of his grubby overalls – enough to pay in full for the vehicle!

In his latter years when people would compliment him on his age or how he still got around so well, he would say “I do what I can do, and what I can’t do I ask somebody else to do.”

It was always entertaining when it came time to say goodbye to Grandpa. In addition to the “kick-a-poo joy juice” or beer in the fridge quips referenced above, Grandpa would often sigh and remark that “Momma told me there’d be days like this, but not this many.”

Another favorite departure message from Grandpa was a bit of sage advice: “If you have any wooden nickels, keep ’em. They’re worth more than the others!” or “It’s a jungle out there,” or “Take it one day at a time. That’s what you gotta do.”

Saying “see you tomorrow” to Grandpa Ed would usually result in a response of “Lord willing and the devil don’t interfere!”

And so it has come – the final earthly goodbye. I pray my memory of his baritone voice singing this song will never fade.

Show Me The Way To Go Home

I’m tired and I want to go to bed
I had a little drink about an hour ago
And it’s went right to my head
Everywhere I roam
Over land or sea or foam
You can always hear me singing this song
Show me the way to go home.